Achari  was born as Annabhimoju Madana Chary to middle class parents, Annabhimoju Sambaiah and Kanthamma in 1937 at Miryalaguda. He showed signs of amazing leadership skills from a very young age which were noticed first by his elder brother, Late Sri Saidaiah Chary, who in turn helped him nurture and develop these traits. As Achari started working in construction fields along with his brothers, Late Sri Saidaiah Chary assigned him the additional task of managing labourers at the work site. Over the years, the two brothers were instrumental in giving shape to many iconic buildings in Miryalaguda like the Mandal Praja Parishad office, the K.R. Estate as well as the Shakuntala and Srinivasa Theatres. 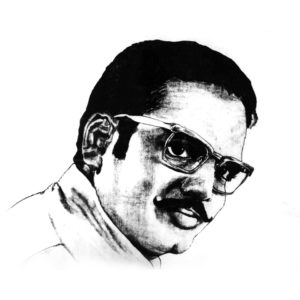 Achari was passionate about collecting rare and unique items that he treasured, like a Diesel JAVA bike which he bought from a retired army officer in the year 1966. He further customised the bike to carry a 12 Barrel gun, which was another one of his rare collections. In the late 60s, owning a bike was a symbol of status and was extremely uncommon in middle-class homes.

The Telangana Agitation in 1969 marked the start of Achari’s political journey. He later commenced the Telangana Praja Samithi (TPS) along with his younger brother, Late Sri Janardhana Chary and a few other supporters. During the agitation, he had snatched 303 Rifles from the hands of police officers.  As a testament to his strength and valour, people of Miryalaguda still recount the story of how he had broken one of the 303 Rifles with his bare hands before disposing of it into a nearby well. To quell the agitation, the police started to fire but fortunately, Achari and his supporters managed to escape. It was later learnt that one of his companions was killed in the police firing. Following the protest, Achari, who was seen as one of the important agitators for a Separate Telangana State, was jailed for six months. However, he got bail with the help of his elder brother Late Sri Saidaiah Chary and a family friend, Late Sri C.D. Naidu.

Soon after coming out of jail, Achari merged the Telangana Praja Samithi (TPS) with Congress and started his Political career working under Late Sri Tippana Krishna Reddy. On observing Achari’s leadership qualities, Late Sri Tippana Krishna Reddy gave him a prominent role in the party and Achari soon became the Taluka President for the Weaker Section and was the first person to form sixty odd unions in the Miryalaguda Taluka.

Later, in 1975, Achari became the Chairman of the Agricultural Market Committee. As a Chairman, he was successful in implementing several reforms under the Market Regulations. One such major change was aimed at preventing farmers from being exploited by the market officials by increasing the salary of contract employees. He also built godowns and crop sheds for farmers to store their crops. His foresight of building a compound wall around the Market Office and Rural Policy Station for protecting crops from being stolen by thieves or eaten by pigs.

Achari’s other endeavours included the construction of the Girl’s High School in Miryalaguda as well as initiating the making of the New Bus Stand in Miryalaguda. The bus stand ensured an easy commute for farmers and students alike to travel to surrounding villages. Around the same time, he also invested his efforts in laying down roads in order to have better transportation with nearby villages like Chinthapalli, Thunagapahad, Adavidevulapalli, Annapureddy Gudem, Kalvapalli, Thakellapadu, Thopucharla, Salkanooru, Bommakallu and Mothkuru even today.

Late Sri Achari had also put in efforts in setting up a new Agricultural Market Committee Office in Damaracherla.

Achari’s endeavours were not limited to his religion or his town only as he strongly believed in Secularism. After having convinced his brothers, he donated half an acre of land in Miryalaguda to almost 50 migrant Sikh families. His amiable and friendly behaviour and philanthropist activities endeared him to his people. Unfortunately, while trying to save his friend from an attempted assassination, he gave up his life along with his friend on 16th August, 1979 and his town deeply lamented his loss.

No third party agency is working on behalf of Achari Foundation for any recruitment, training, camps or other activities related to Achari. Please check/consult with Achari Foundation directly to get correct information or assistance. Please beware of any unwarranted claims made by anyone on our behalf. Kindly bring any such claims to our notice for immediate attention and action. Achari Foundation doesn’t charge any money from anyone for these activities. So if you come across any individual/ organization making a monetary demand in our name please bring it to our notice immediately on support@achari.org.